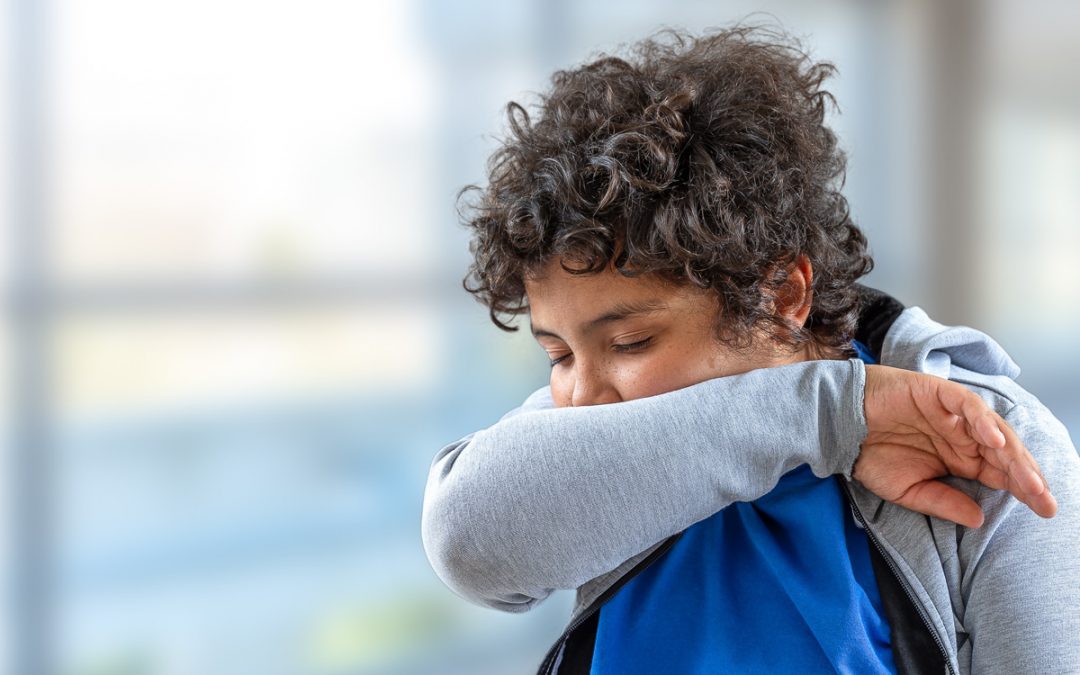 Between 1940 and 1945, around one million cases of whooping cough were reported. However, after the vaccine was introduced later in the same decade, the number of pertussis in children was drastically reduced.

Children under the age of one can develop severe and potentially life threatening breathing problems if the illness is not treated quickly. A child exhibiting symptoms related to whooping cough should be taken to the pediatric center for proper treatment.

How to identify Pertussis in Children

It’s important to know the symptoms of pertussis in children because it initially shares symptoms with the common cold. The first stage can last from one to two weeks and consists of a runny nose, sneezing, a low-grade fever, and a mild cough. The second stage lasts up to 10 weeks and coughing severity increases to its’ namesake. Watch for a cough that continues to worsen and listen for the “whoop” sound as you child inhales deeply and quickly between coughs. Your child might have a hard time breathing normally and become exhausted. A compromised immune system at this stage of infection increases your child’s risk of incurring a host of other conditions including pneumonia, ear infections, weight loss (resulting from lack of appetite), and dehydration. Even seizures may results from lack of oxygen to the brain during a coughing fit. Recovery often begins two to four weeks after the initial coughing fits, marked by increasing ease of respiration and a reduction in coughing. The cough may not go away entirely for many months and can easily return with another respiratory infection.

When should I take my child to the Pediatric Center?

Because the symptoms of pertussis in children starts as just a common cold, it’s important to watch for these signs that it may be more such as:

Treatment at the Pediatric Center

When you arrive at the center, your doctor or caregiver will perform a physical examination and will likely take a swab of the back of the throat through your nose to perform a laboratory test. They may also request a blood sample. If the results come back positive, pertussis in children is treated with a course of antibiotics that lasts two weeks. This method is most effective if a positive diagnosis is made when coughing is weak. Antibiotics are helpful at minimizing the spread of whooping cough, but they won’t stop the coughing so you’ll need to use other forms of care to reduce the discomfort of coughing. The following treatments will help to minimize coughing discomfort and promote healing.

How do I prevent whooping cough?

When your baby is two months old, your physician at the Pediatric Center should start the DTaP regime of vaccinations. DTaP stands for Diphtheria, Tetanus, and whooping cough (Pertussis), for which the vaccination is formulated to protect against. Your child will receive immunizations shot at two months, four months and six months. They will also need a booster shot between 12 – 18 months, and then again at 4 – 5 years. DTaP may be administered as a booster to adults and pregnant women, as well as to children 7 – 10 of age who were not immunized completely with all previous DTaP shots. A booster is needed every 10 years thereafter. After your child receives the vaccine with a shot in the upper thigh muscles, they may experience low-grade fever, swelling, redness, and tenderness at the injection spot. They may also experience exhaustion and body aches, but all side effects should go away in a day or two. If the vaccination is administered on the recommended time schedule, the efficacy of the vaccine for your child is nearly 100%. Over time, however, the effectiveness of the vaccine declines. Seven in ten children are fully protected five years after they receive their last dose of DTaP but by then, they are older and are less likely to be hospitalized. You can help prevent exposure to whooping cough by making sure that those who spend time with your child are up to date on their vaccines.

Download this Handout With Great Information About Pertussis in Children from The American Academy of Pediatrics.

No comments to show.